ARCI has ZERO tolerance policy against sexual harassment. The ARCI Internal Complaints Committee (AICC) had been constituted on December 30, 2013 according to norms as specified in the New Act 2013 on Sexual Harassment of Women at Workplace: Prevention, Prohibition and Redressal. Earlier, the ARCI Women's Cell (ARCIWC) was constituted in March 2010 with an objective of looking after the welfare of the women employees and students, to facilitate redressal of their grievances, to help maintain a harmonious atmosphere at office and to enable women to pursue their work with dignity and reassurance.

Any one or more of the following acts or behaviour (whether directly or by implication), namely:

Often such behaviour goes unpunished because of hesitation on the part of women to report such behaviour out of a sense of shame or fear or both. It is important for women to protest against any behaviour that they feel is unwanted and unacceptable. The AICC at ARCI, Hyderabad has been set-up with the aim of providing women an appropriate complaint mechanism against unwelcome sexually determined behaviour whether directly or by implication. 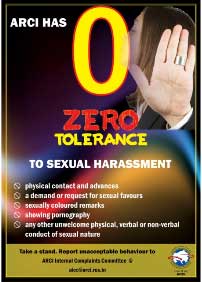 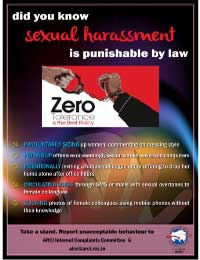 What should you do if you are sexually harassed?

What action can be taken against the offender?

In case, it has been proved that the offender has indulged in sexual harassment at the work place, appropriate disciplinary action would be taken against him . Where such conduct amounts to a specific offense under the Indian Penal Code or under any other law, a complaint shall be filed with the appropriate authority for action to be taken in accordance with the law.

Care shall be taken by the AICC to ensure that the complainant and the witnesses are not victimized while dealing with the complaint. The complainant has the option to seek transfer of the perpetrator or their own transfer.

The Role of the Committee